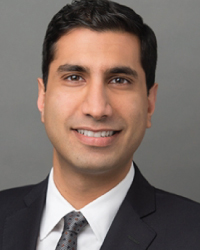 Rahim Moloo is a partner in the New York office of Gibson, Dunn & Crutcher LLP where he assists his clients to resolve their international disputes.

Rahim is a former recipient of alumni UBC’s Outstanding Young Alumnus award. While at UBC, Rahim won the World Public Speaking Championships and the Canadian National Debating Championships. After UBC, he obtained a graduate degree in law at NYU School of Law, where he graduated as the All-University Commencement Speaker.